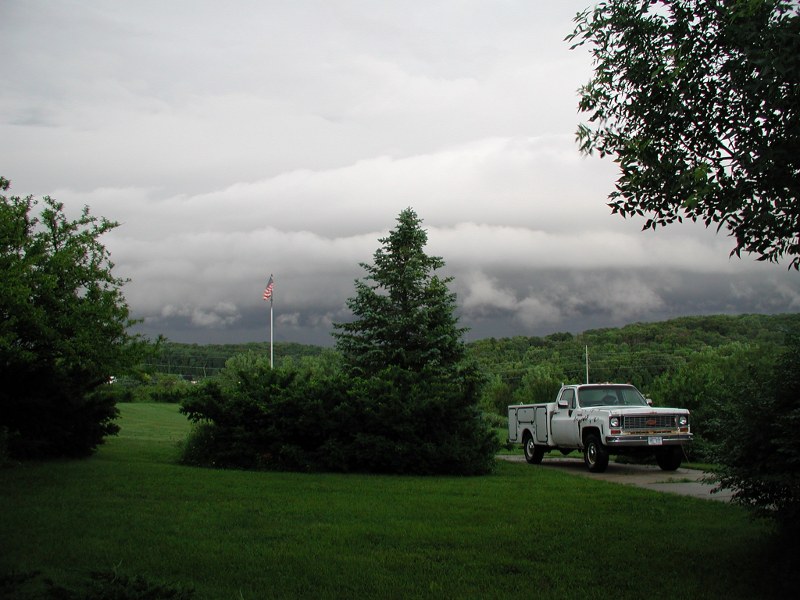 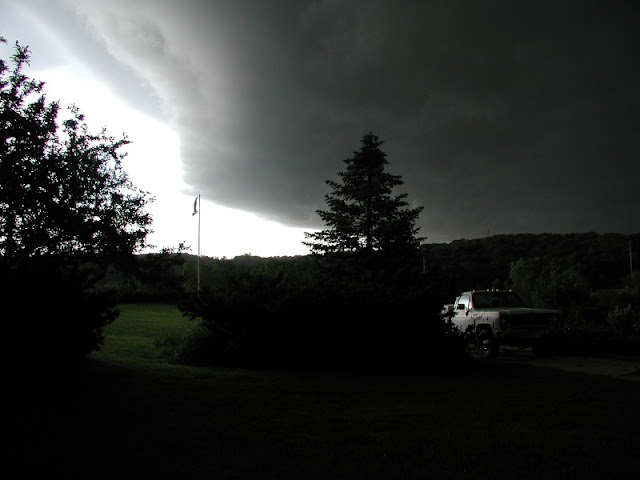 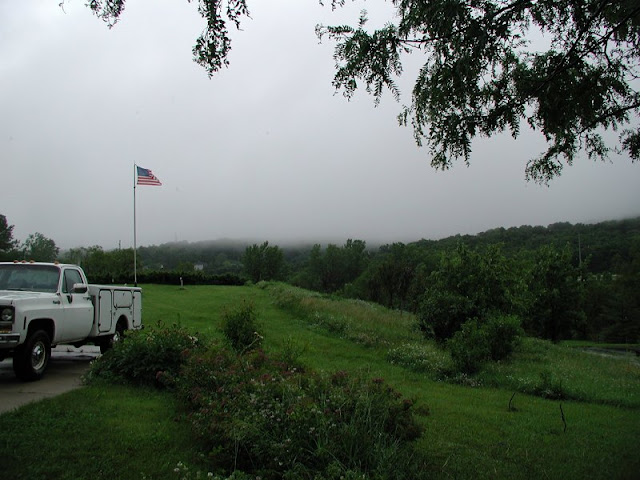 Posted by Wally and Sue at 6:46 PM No comments: 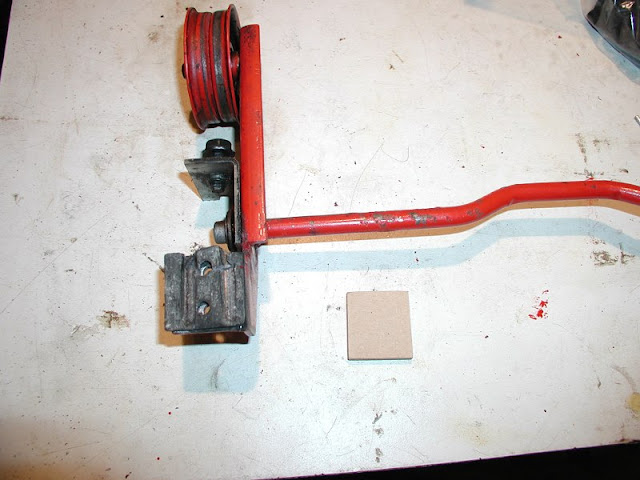 This brake pad runs against the auger drive pulley when the auger is disengaged. It is no longer available and is worn down almost to the metal. The original is glued on. Cut a piece of hardboard to replace it. 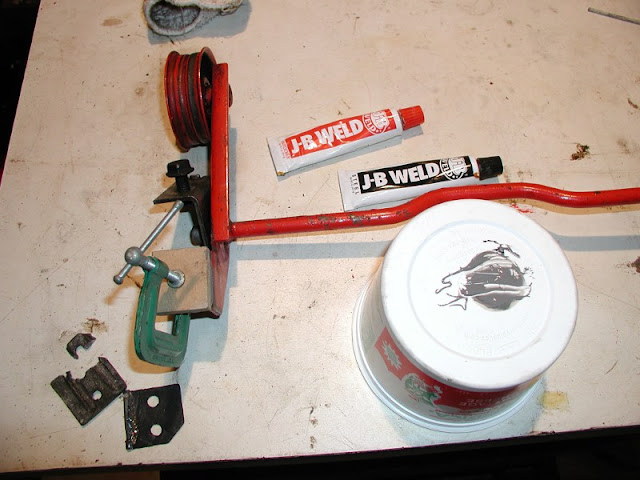 JB weld epoxy should hold the replacement on. 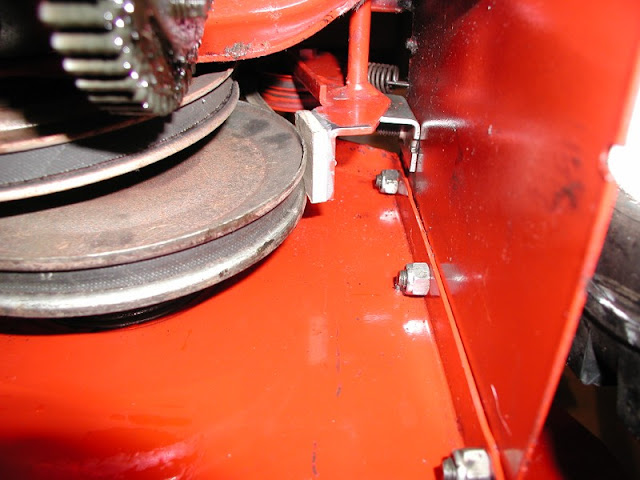 Here is how it fits and it seems to work! A short vid below.

Visitor's in a GMC 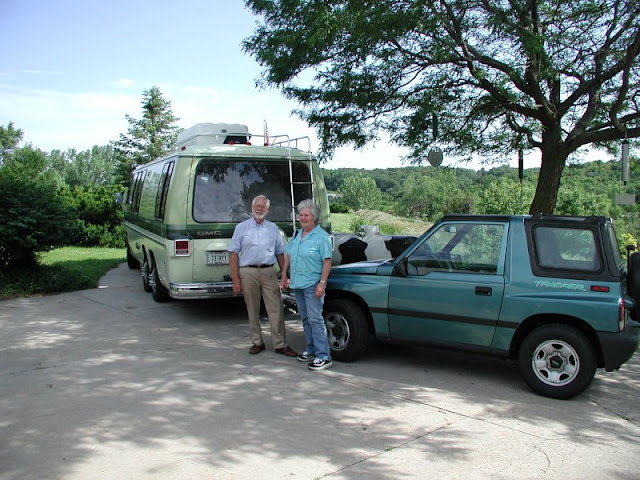 Walt and Sarah Halley stopped by on their way to Montanna. We had a great time, Walt and I went to U-Pull-It parts and got parts of wire looms with connectors for GM ECU's and a computer controlled HEI distributor. 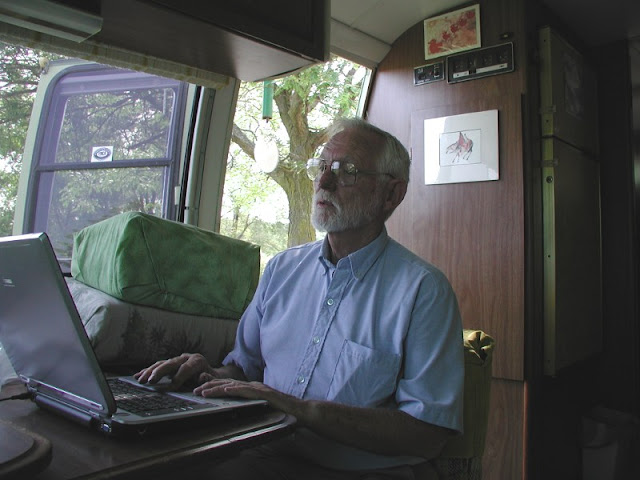 Walt educated me on the EBL flash engine control computer he is fixing to install. Made by DynamicEFI this fits inside the GM computer and allows programming without burning chips. We didn't have enough time.............http://www.dynamicefi.com/
Posted by Wally and Sue at 11:02 AM No comments: 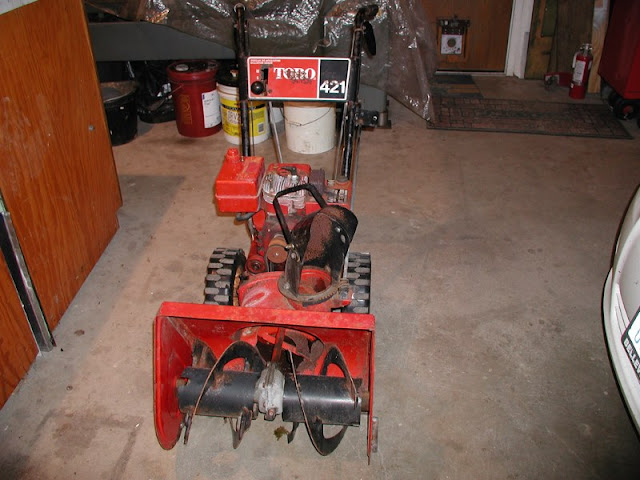 I saw this snowblower set out for trash pickup. I asked and was told "have at it" by the owner. It is missing a few pieces but looked like a fun project and I know someone who needs one. It was built in 1980 by the serial # and is a 421 two stage model 38010. 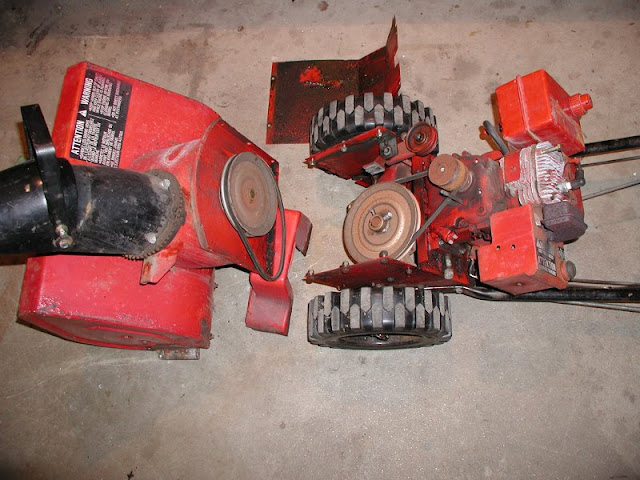 The impeller had a lot of slop in it's bearing. Here it is split open for access. 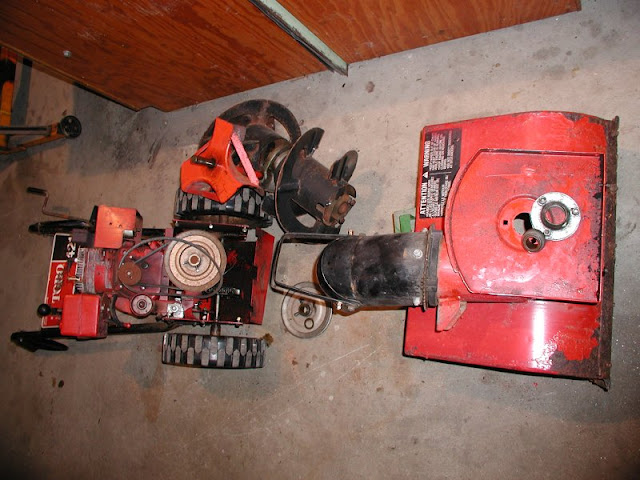 The impeller bearing is a sleeve bearing in a self aligning mount. 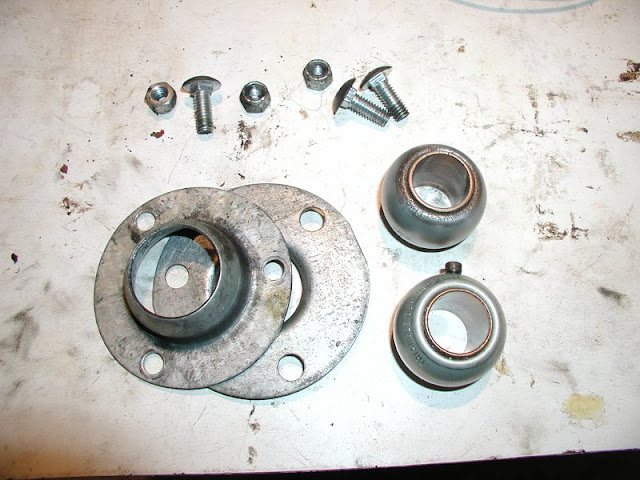 There is a change in the design, the new style has a screw to keep it from spinning in the mount. Same bearing used in a lot of different blowers up to at least 8 hp. The old one had some cracks in it and was .020 out of round. Less than $11 new! 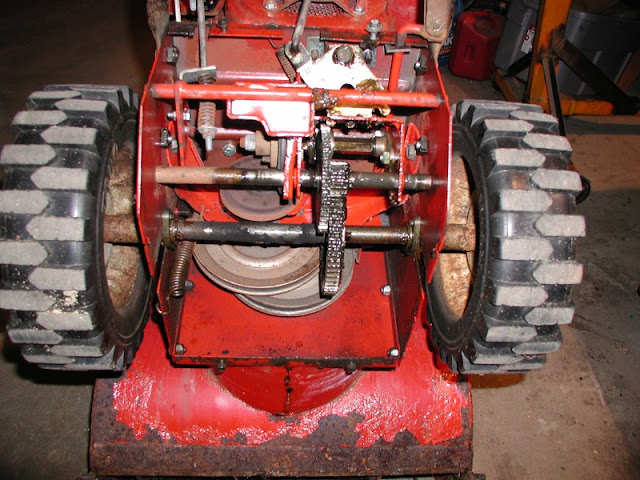 Here is the drive, its a rubber rimmed wheel that presses on a disc in different places to change speeds and direction. It looks like it will still work fine. 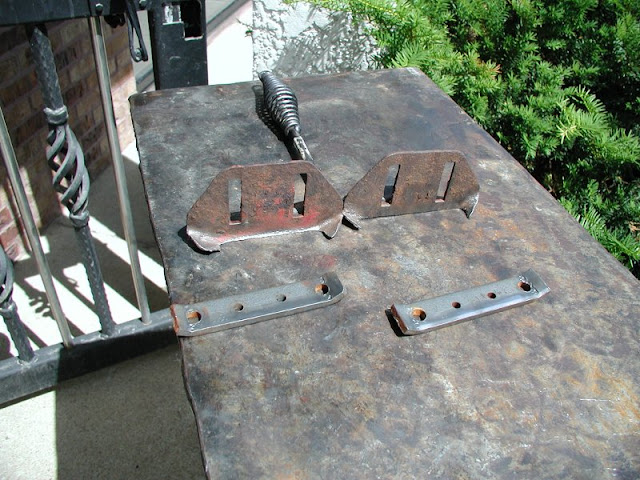 Skids were worn through. Going to weld some straps on for new shoes. 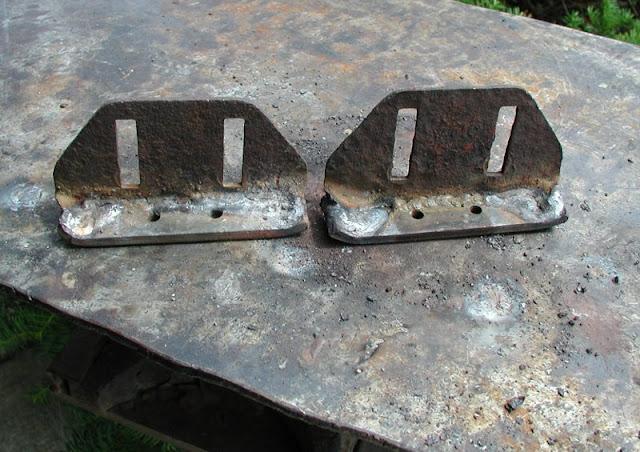 New shoes ready to go. Great to have good tools. 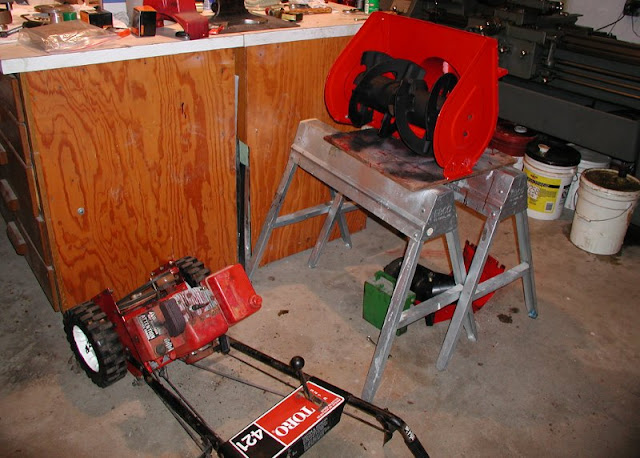 Wire brushed off the rust and used Rustoleum rust reformer before painting. Use the liquid reformer, spray stuff is glorified paint. One of the shear pins was missing so only one side of the auger turned. The shear pins are 1/4 grade 5 bolts 2 inchs long. I replaced them both. 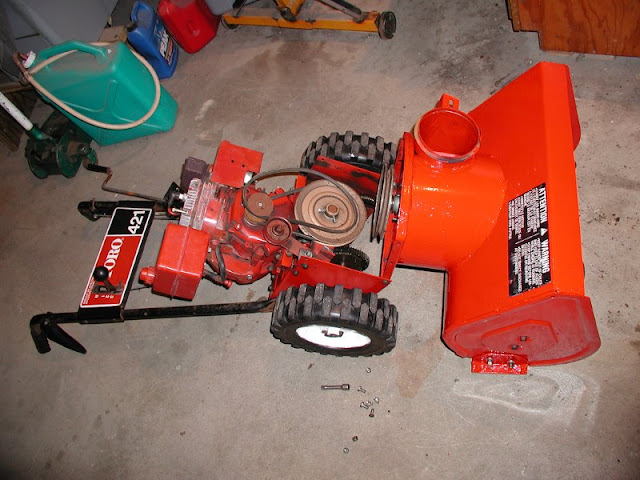 The thing will split apart like a hinge to work on it. 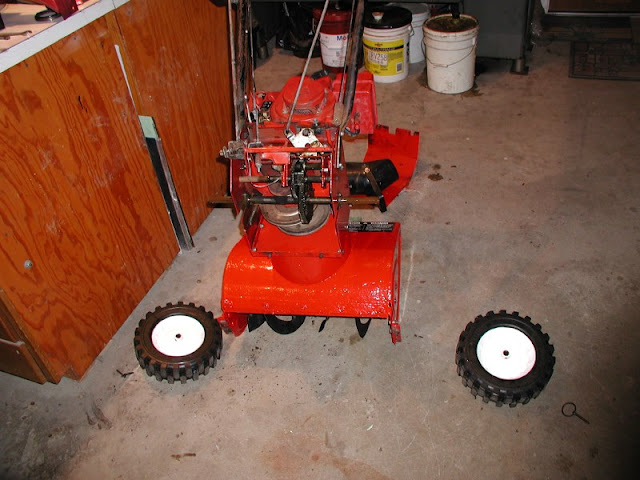 Wheels are held on with spring pins, easy to take off and get at things. 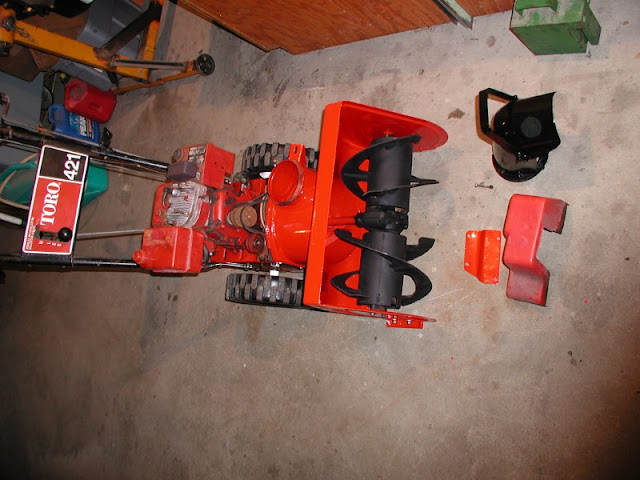 Putting pieces back on. Still need to remake the gas tank brace. It does run.
Posted by Wally and Sue at 7:53 PM 1 comment: 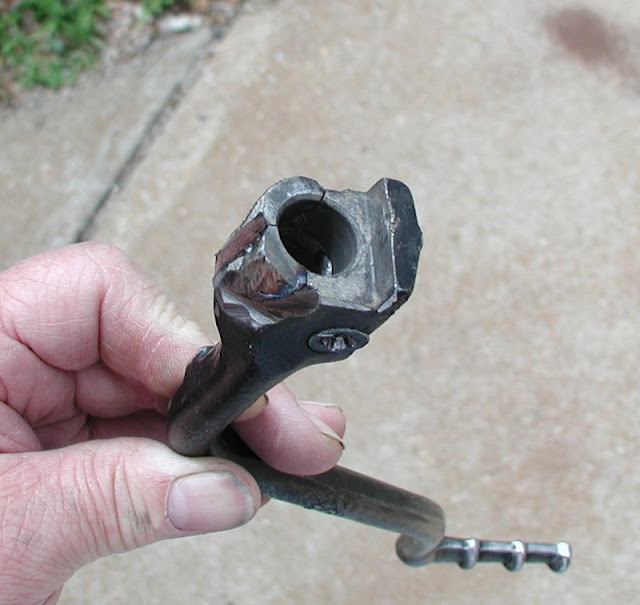 Motorcycle kickstart lever cracked in three places. Started to vee out the cracks. 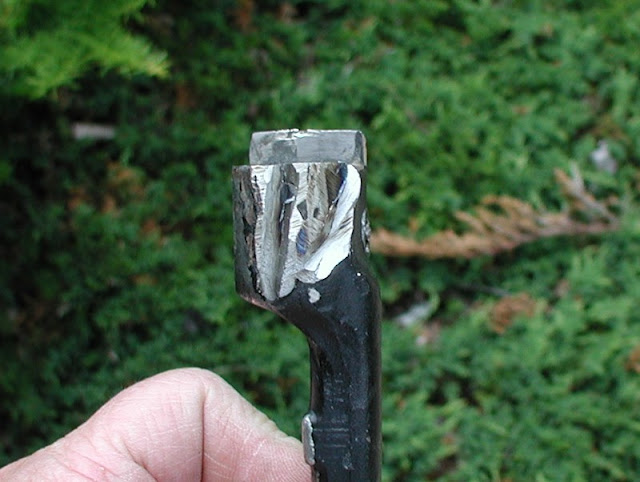 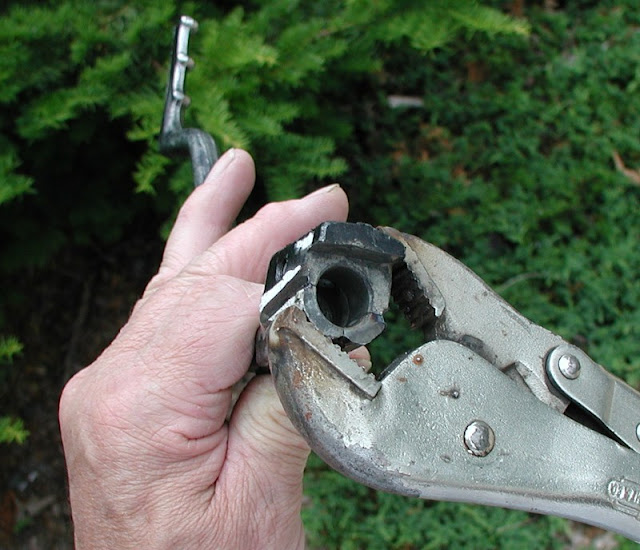 Squeezed back in place 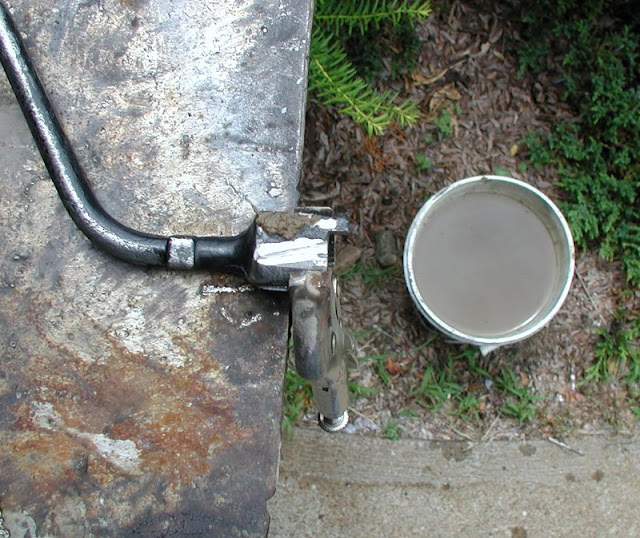 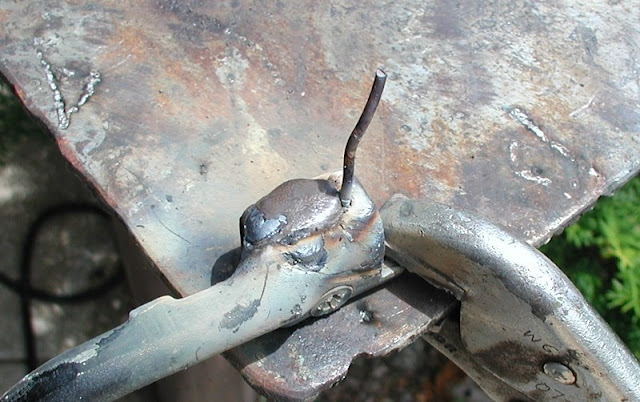 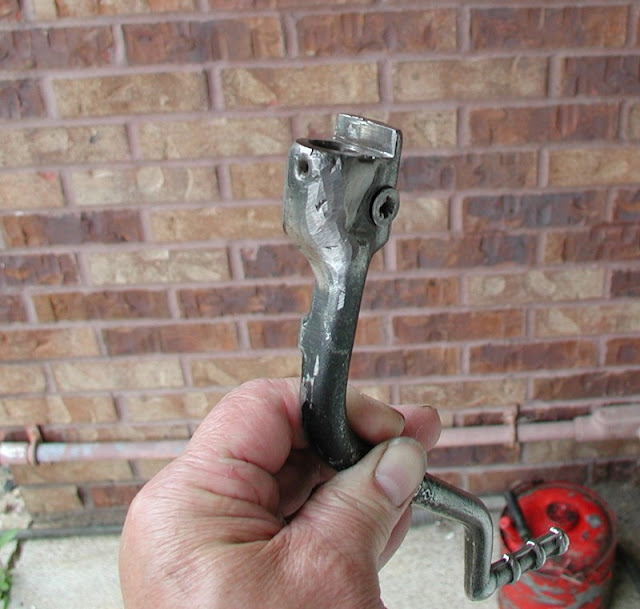